Jaroslav Heyrovský: The story of a mercury drop

This article was partly inspired and related with the publication presented in the Interface journal of The Electrochemical Society, Vol. 24, No.4, Winter 2015, 36-39.

''Professor Heyrovský. You are the originator of one of the most important methods of contemporary chemical analysis. Your instrument is extremely simple - just falling droplets of mercury - but you and your collaborators have shown that it can be used for the most diverse purposes ... May I ask you to advance and receive the Nobel Prize for Chemistry for this year from the hands of our King'', said professor Arne Ölander, member of the Nobel Committee for Chemistry, in Czech language to the laureate Jaroslav Heyrovský at the award ceremony in the Stockholm Concert Hall on 10th December 1959. The year of 2020 is the year of 130th anniversary of the birth of prof. Jaroslav Heyrovský, the first Czech recipient of the Nobel Prize in Chemistry and 61 years since he received his prize in Stockholm (Sweden).

The travelling exhibition called "The story of a mercury drop" introduces Jaroslav Heyrovský to the young generations since the year 2009. Since 2009, which was the 50th anniversary of the award of Nobel prize to Jaroslav Heyrovský on 10.12.1959, the wider public is reminded of this scientist by a travelling exhibition which presents the life and scientific work of Jaroslav Heyrovský not only to those who remember polarography, but also to those interested in natural sciences born later, i.e. to students and pupils.  The purpose of the exhibition is to introduce the personality of  Jaroslav Heyrovský not only as a scientist but as a human. The exhibition has been composed of documents which had been deposited in the institute archive for many years, a lot information was drawn from the books about Jaroslav Heyrovský written by his students, or from narrations of his children, pupils and  coworkers. A large variety of  polarographs from 1924 until the 1990s are exhibited, as well as photographs, written documents, books, publications and film material. For the selection of the exhibits the team examined almost 10 kg of written materials, 200 photographs, 150 slides and 6 km of celluloid films from the 1950s and 60s. Along with some 10 instruments it seemed that there would be sufficient material for creating an exhibition. First preparations started at the beginning of 2008 and the exhibition had its small-scale showing  in November 2008 at the the "Week of Science and Technology" organized by the Academy of Sciences of the Czech Republic in its central building at Národní třída. It created a considerable interest from the visitors and the team of authors (three scientists from the J.Heyrovský Institute of Physical Chemistry of the ASCR: K. Stejskalová, M.Heyrovský [died 12.4.2017] and R.Kalvoda [died 2.8.2011]) decided to continue working on it until  the end of  2009 and offer a more comprehensive exhibition to the general audience across several places of the Czech Republic. The exposition is composed of  a set of twelve posters (size A0) which, using photographs and documents, introduce the visitors to the life and the scientific work of Jaroslav Heyrovský. Heyrovský’s family also lent photographs from the family album to make copies for the exhibition, some of which have not been publicly presented before. Many photographs, slides and written material from the institute´s archives illustrate the research work of J.Heyrovský and his team. The second part of the exhibition consists of instruments (development series of 8-10 polarographs), glass polarographic cells, slides which polarographers lectured with, a display of  books on polarography in various world languages. The films made in the 1950s and 60s documenting Heyrovský´s research are projected as a part of the exhibition in an endless loop. The exhibition is completed with an accompanying programme of a number of popularising lectures not only about Jaroslav Heyrovský and his research in polarography, but also about contemporary science and research in the field of physical chemistry in which the scientists at the Jaroslav Heyrovský Institute of Physical Chemistry are engaged today. The travelling exhibition "THE STORY OF A MERCURY DROP" which has since 2009 been exhibited at 31 places, can also be explored on the web page www.heyrovsky.cz 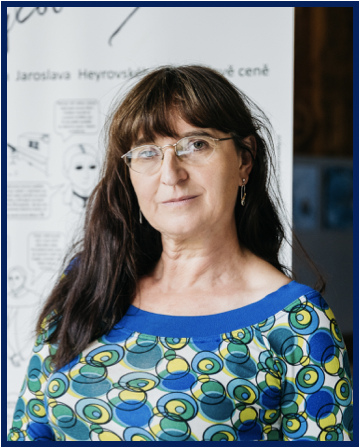 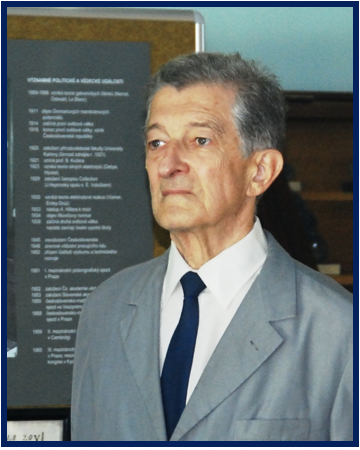 Květa Stejskalová studied chemical engineering at the Technical University in Prague and defended her dissertation work in the subject physicalchemistry - heterogeneous catalysis (1995). Since 1989 she worked in the Jaroslav Heyrovský Institute of  Physical Chemistry on the fundamental and applied research of catalysis and, ultimately, of electrochemistry. Currently, as the secretary of vice-director for education, she prepares and realizeseducational and  popularization programs for the institute,  which are seen by up to 8000 participants every year. For her work, she was appraised by theV.Náprstek honorary medal for the popularization of science in 2011. Michael Heyrovský (1932-2017) studied chemistry at the Faculty of Science, Charles University (1951-1957). From 1957, he was employed at theInstitute of Physical Chemistry, Academy of Sciences of the Czech Republic. Between 1962 and 1965 he did a research study at the Department of PhysicalChemistry, University of Cambridge and obtained a PhD with his thesis on "The Electrochemical Photoeffect”. He spent two years of research stay (1967 and 1968) at the University of Bamberg, Germany, as an Alexander-von-Humboldt scholar. He is also an author and co-author of over 100 publications on polarography and voltammetry and their applications.